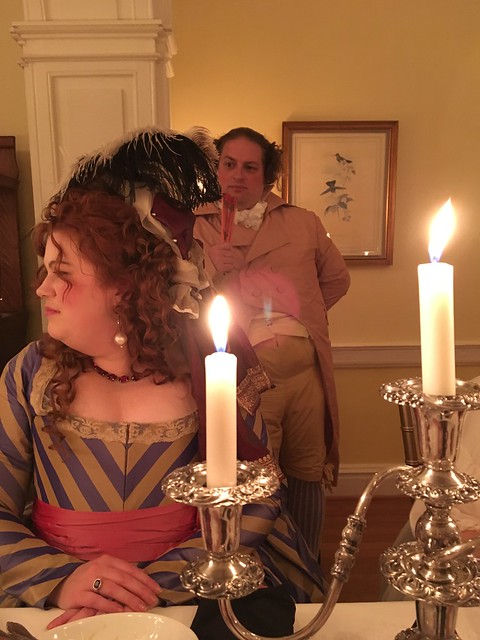 Wherein my husband is a very “good sport”

Or at least that’s what my mother persists in telling me constantly.  Jenny-Rose and her family (they’re all just as amazing and talented but I don’t think they have blogs…) decided to host a very swanky 18th century dinner party called The Pimpernel Dinner, and one cannot have a Pimpernel Dinner without well a Pimpernel. So who’s got a husband with great acting chops and will wear whatever he’s handed? *looks around the room*…*crickets*…shit I’m making menswear again aren’t I?

Now I’m really not a fan of menswear making for a few reasons.

And that sassy pose

They seem to have suffered microcephaly a lot though.

One of the things I like about this period in menswear is how patently ridiculous it gets. You do see some matched three piece suits, but more often then not it’s a free for all. My friend Ginger nicely picked up some silks in the L.A. Garment district for his jacket and breeches and I found some fabric for the waistcoat online. What I didn’t have a lot of was time (we’ll leave out the part about the party being announced like a year in advance or that I committed to two major events two weeks apart and that was probably maybe my fault…I said we won’t discuss it).

I was trying to keep the budget for this monstrosity to within semi-reasonable levels. I splurged on the silk so one of the ways I save money was to re-use a pattern I had for breeches that was just slightly off period.

Technically this pattern by Country Wives is for 1800-1825 but the narrow fall is close enough and I was working with what I had.

I shortened the legs, then tried him on the husband and took in the legs till we reached foppish-vacuum-sealed and added knee bands. My knee bands gaped just a tiny bit…so bows. 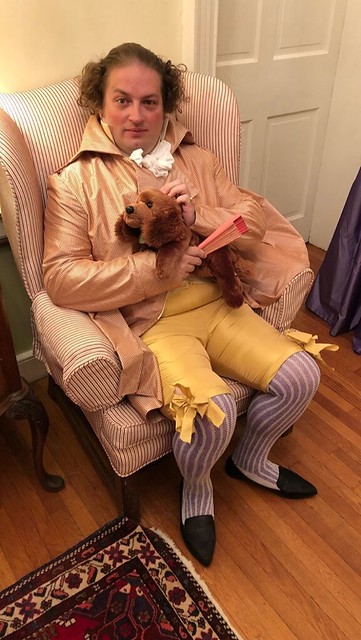 I used the pattern I draped for his Mr. Darcy waistcoat and added to the length and front width. Re-drafted the collar. It’s really a beautifully embroidered waistcoat…too bad you can’t see it worth a damn. I should have just skipped it.

For the coat I did spring for a real pattern and bought Laughing Moon 124. A word to younger costumers, when you’re choosing where to invest and where to cut corners. Sometimes if you don’t have the right sleeve pattern it’s worth the money to pay someone else.

Lets take a moment to appreciate the absurdity of the collar. I meant to cut it down to be more proportionate to Rob’s average height, but 11pm Robin forgot. So absurdity it is! For next wearing I would like to properly finish it with all the called for buttons, shorten it about 2″ and shorten the sleeves an inch. But considering I did zero mock ups and just made it…I got away with highway robbery in terms of fit.

how DARE YOU MADAM! With Modern Mantua Maker.

His stockings were borrowed from my closet, Amanda gave them to me for Christmas a few years ago so I can’t be sure, but knowing her shopping habits they’re from sockdreams. (regardless of these stockings another highly recommended shop). And the absurd pointy shoes were from target the night before. Yeah the costume gods smiled on me on that one.

There was stiff battle required to save the champagne!

With two of our three beautiful hosts

I happily re-wore my copper open robe and feel beautiful

Did I mention the location was stunning?

Wow you’re still reading? Colour me impressed. Thank you to Ginger for getting fabric in LA, thanks to Jenny-Rose for styling his delightful hair and thanks to my husband for always being a good sport. 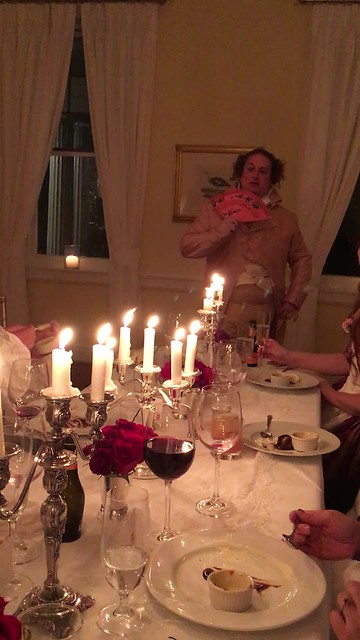