Have you ever wondered what it would look like if an 18th century petticoat and a caftan had a baby? Well look no further than the new Simplicity Pattern #8593. You too can sport the giant-baby-bib look. I bought the pattern as it was on sale at the J and I was planning to attend a 1940s airshow. It’s from their vintage collection, dated the 40s and sounds perfect right?…well…let’s start at the beginning…

Always be suspicious if there’s only one sample

I ordered some very smart white seersucker from fabric.com, two thumbs up washed beautifully and lovely hand. For being a white on white stripe it’s not even that see through.  Will order again.

One thing this pattern has going for it is speed. I chucked my fabric in the wash on Saturday at 1pm and with a dinner break, and internet farting around still managed to have a fully finished garment at 10:45. With the speed I sew that was fairly impressive.

So what’s unique about this weirdo blouse/poncho/Chippendale’s sized apron? It doesn’t have side seams. The idea is that you tie the back around the front and the front over the back. The sides over lap leaving a gap for your erm arms to stick out. Lets say this does not work exactly as planned. 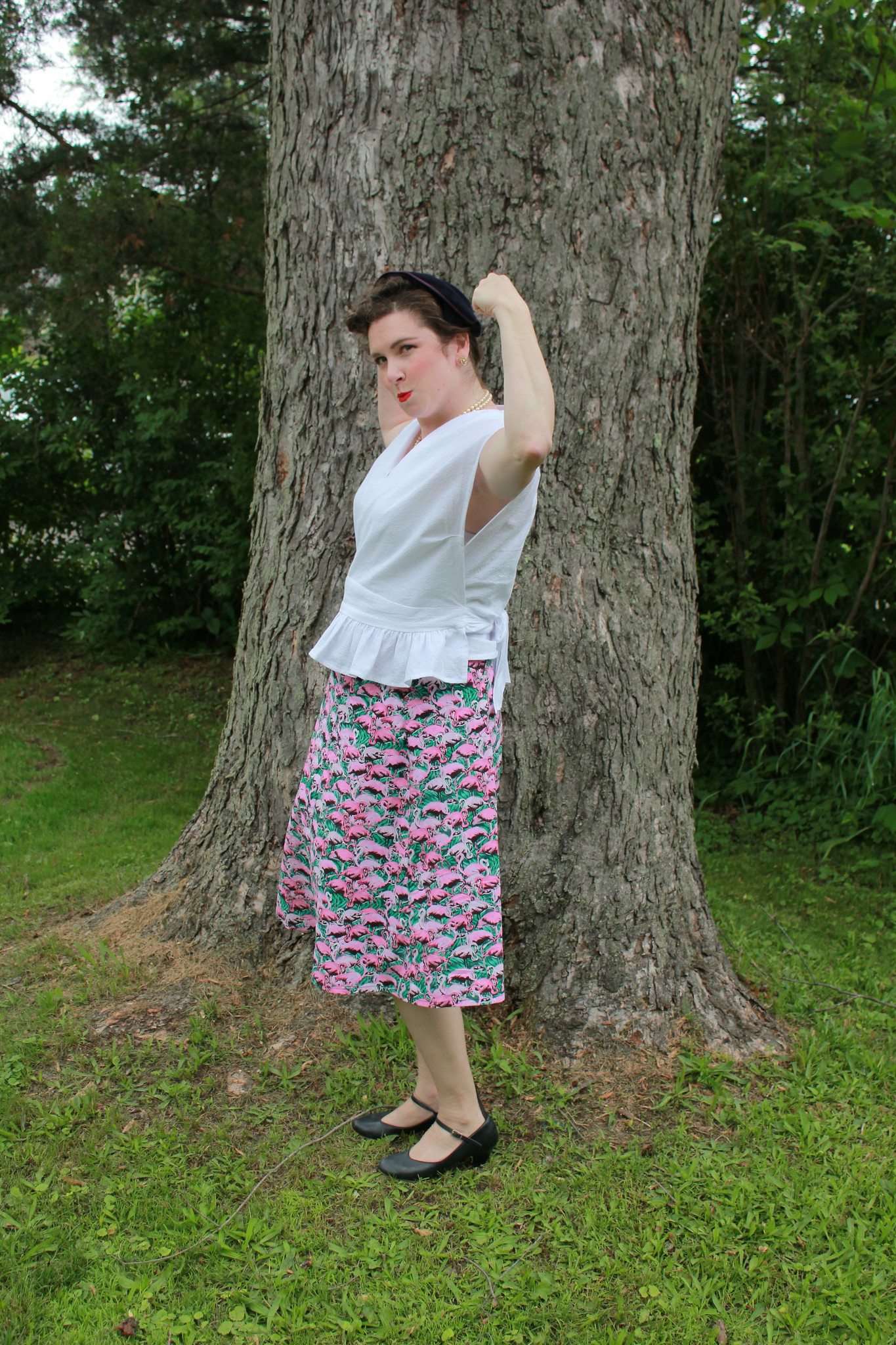 Would you like to see all the way through to my nipple or shall I angle myself so you just get tasteful side boobage? I wore a camisole as I would with any girdled outfit (sophisticated ladies don’t believe in chaffing)…but one small breeze and the world could tell you if I’d remembered to wear my bra right side out. 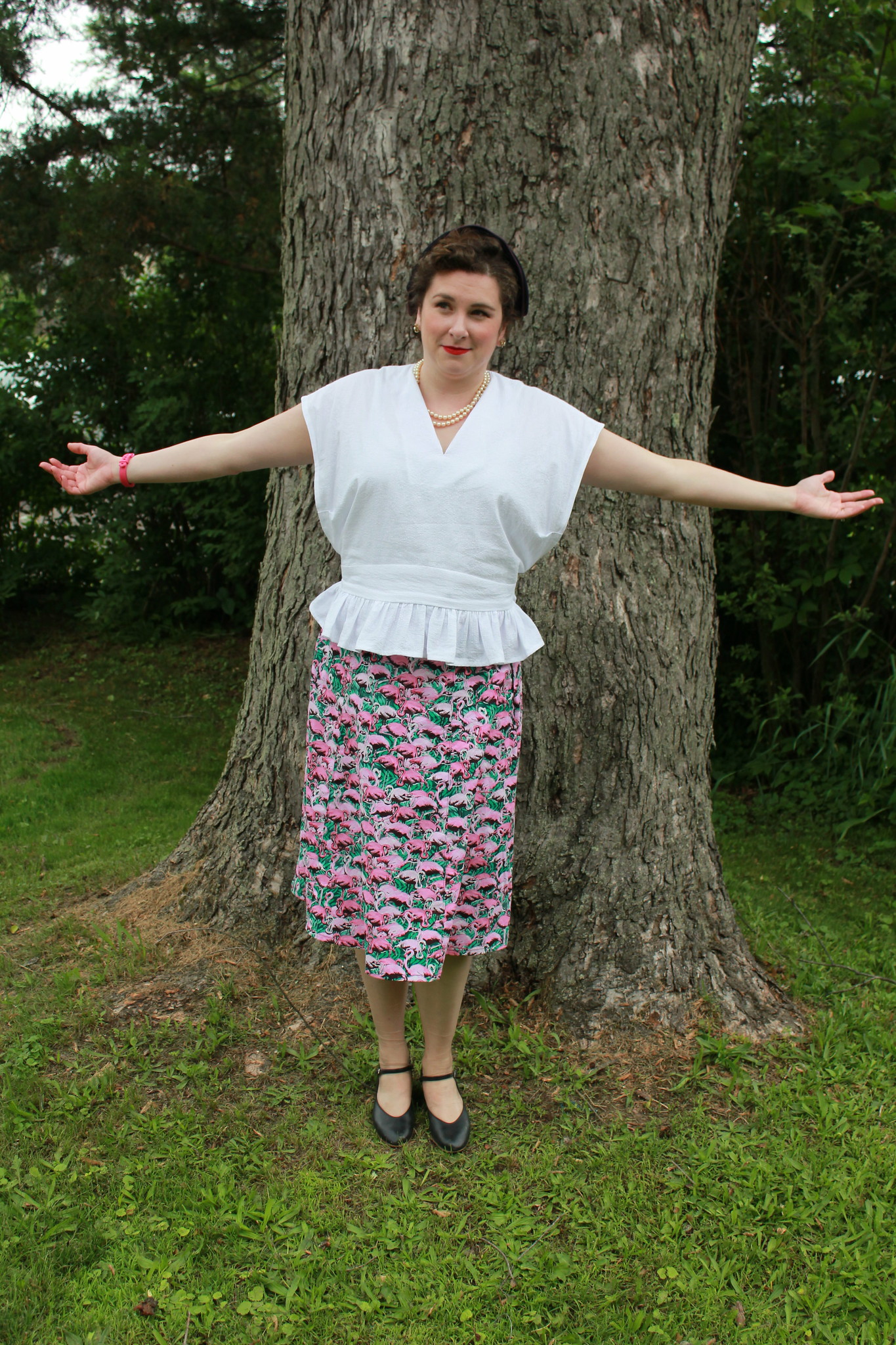 I made version D with a peplum because what I lack in hips I make up for in abdominal girth and thought it might be slimming. I think the tucked in version MIGHT have gaped less, but any time you moved it opened amounts varying from “tasteful side boob” to “why am I feeling a massive breeze.” Whole thing felt very disconcerting to wear because of said breeze. Like that nightmare you have where you’re in high school and somehow forgot the side half of your shirt. 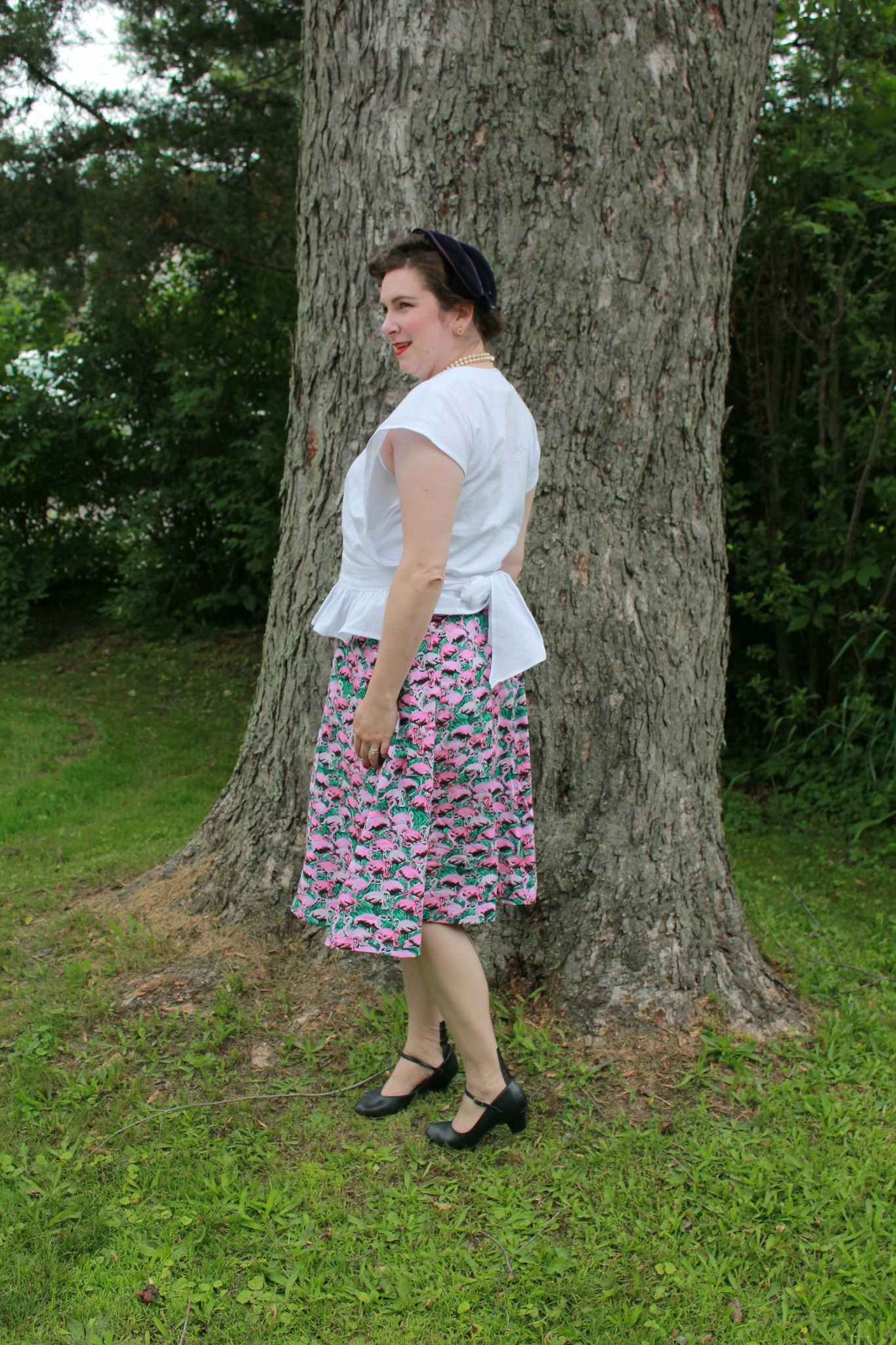 Hey baby, like my target camisole? I’m so period correct

I thought it might be more flattering if I tried it without the peplum? tucked in maybe? Perhaps the weight of the skirt waistband would hold the sides together more firmly and I’d feel less of a cross breeze? 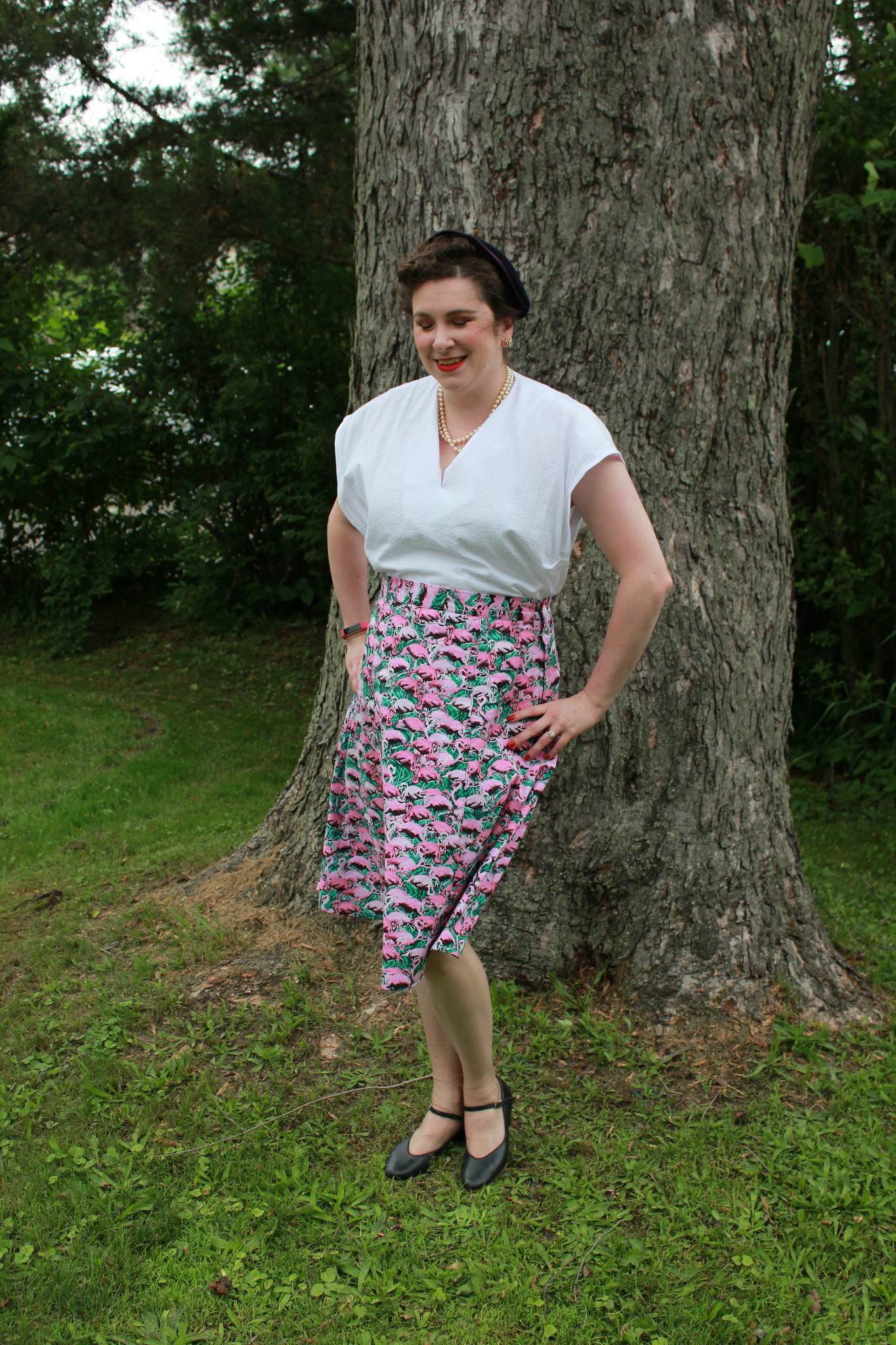 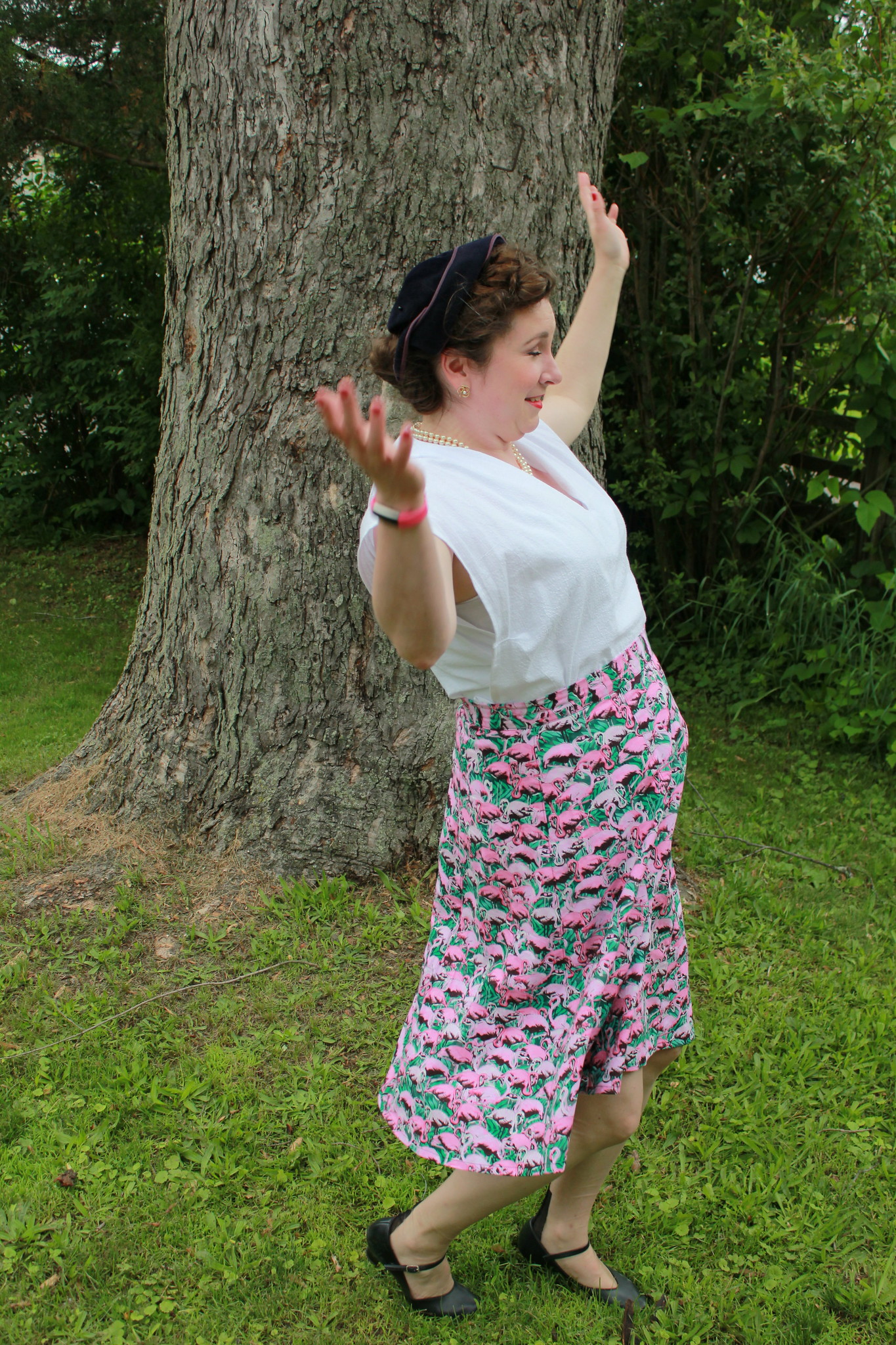 I swear all I drank was tea.

That would be a big ‘ole NOPE on the more flattering. 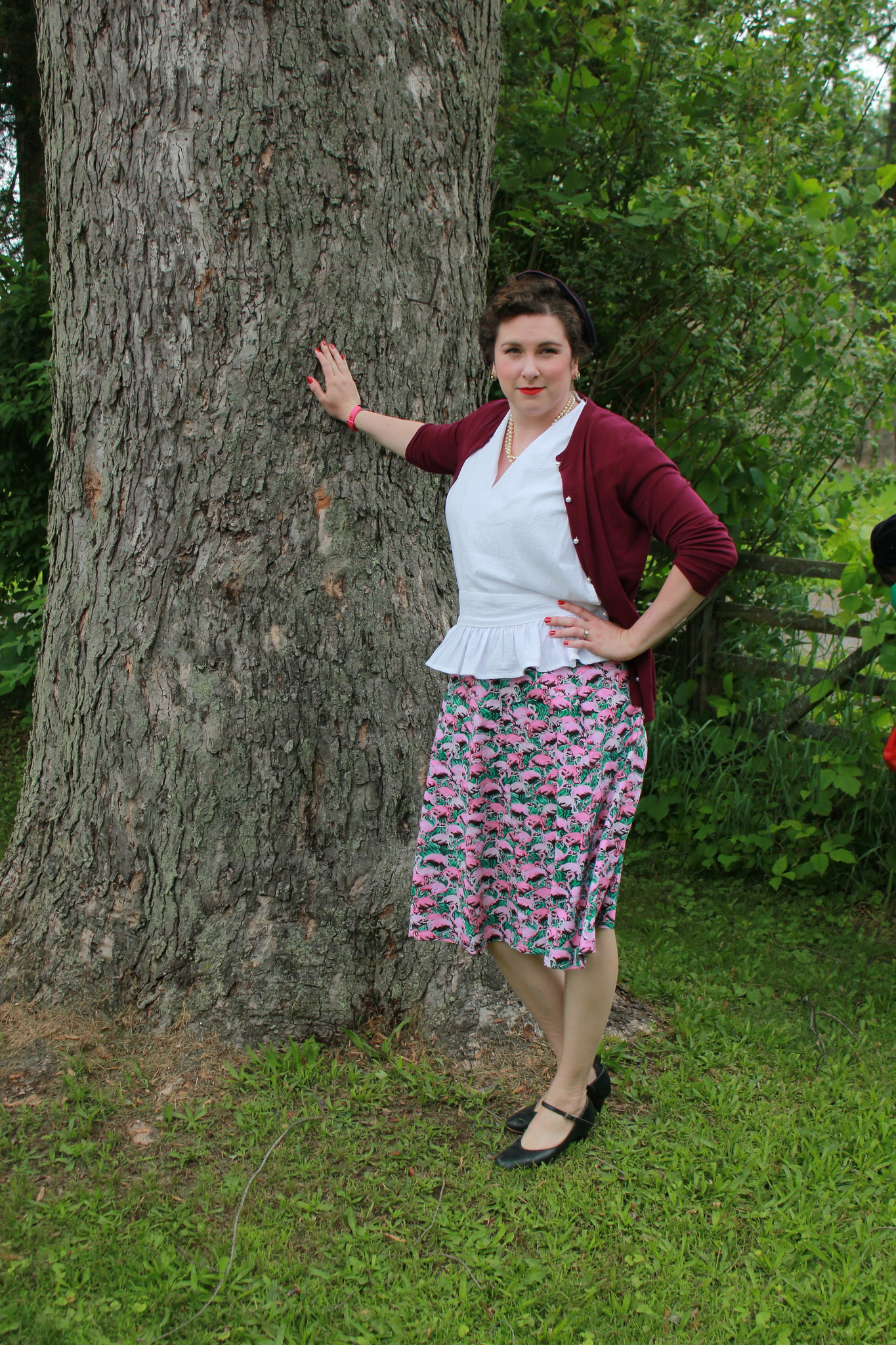 Pro tip, cardigans hide a multitude of sins. like errant side camisole.

A few final thoughts: Do I regret making this weirdly aerated crumb catcher? Of course not! Firstly it was hilarious to wear, secondly it was more of a “what on earth would that thing that looks good on paper actually DO in real life” sometimes you just get so curious. I could probably put some buttons in the side higher up and limit the gappage. But honestly I look enough like a linebacker without 4″ of shoulder sticking out after me. And in case you were wondering if fit was part of the issue I did try it on my friend Alice who is smaller than me to see if more over lap front to back would lesson the wind tunnel effect. Nope. Still a girl in a giant art smock ready for a messy lunch who’s very concerned with getting proper ventilation to her pits. In summary: I’d probably skip this pattern, unless you get really really hot in the side rib